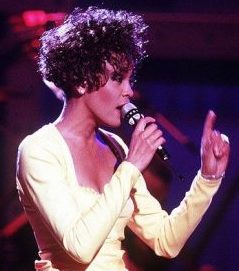 Why we will always love Whitney Houston is on my mind. I learned the devastating news about her death last night, while I spoke at A Night of Passion. It was a wonderful gathering of women. We laughed and had a lot of fun. My poem, Naked Desires, was a big hit. During the evening, someone told me that Whitney Houston died. “WHAT?” I said. I couldn’t believe it. I hoped it wasn’t true.

Like many in my generation, I grew up listening to to this iconic singer. She created the soundtrack for every teenager in the 1980’s. I remember when we were introduced to her with “Saving All My Love For You.” What a beauty…and, that voice!

A few years ago, I watched the Oprah interview. I was so happy that she was free of both Bobby Brown and drugs. She looked great and sounded like she was in a good place in life. Now, she will go to the ultimate place in heaven too soon. Whitney was only 48 years old.

I cannot watch anymore coverage about her death…it’s just too sad. I hope I can get through the Grammy’s tonight. My wish is that people, young and old, celebrity, and non-celebrity alike, will wake up and see that DRUGS kill people.

We Will Always Love Whitney Houston

Some people are blaming Bobby Brown for his ex-wife’s death. Is this fair? While Whitney is responsible for her actions, it appeared to the public (based on his reputation) that Bobby was a negative influence in her life. If Whitney suffered from low self-esteem before she met Bobby, the logical conclusion is that their pairing exacerbated her issues, as well as Bobby’s – both of them being addicts. So, while I don’t blame Bobby for Whitney’s death, I acknowledge that he played a role in her addiction – which ultimately lead to her death.

Whether or not Whitney’s death was drug related, the fact remains that drugs ruined her life and her greatest gift of all – that magical voice. Rest in peace, Whitney. WE will always love you.

Watch the trailer for the upcoming (December 2022) biopic “I Wanna Dance With Somebody” here. Read my Ode to Michael Jackson here. NOTE: Image of Whitney by David Mark from Pixabay.

Here’s how to chop an onion in a @vitamix. No kn

From my blog post (link in bio): “The Disability